Existing for more than 100 million years, sea turtles are one of Earth’s most ancient creatures. They are equally one of the most charismatic so much so that turtles have had starring roles on the big screen, such as in Finding Nemo. Yet it is their fragility, with all seven sea turtle species either critically endangered or vulnerable, that we must now look to protect to ensure the future of these iconic animals. From the shallow seagrass beds of the Indian Ocean to the colourful reefs of the Coral Triangle, turtles embark on delicately balanced lifecycles; undergoing the ordeal of dragging themselves up beaches to lay clutches of eggs up to 150 strong whilst avoiding the threat of predation and human encroachment,  upon hatching embarking on a treacherous journey into hungry seas, followed by decades of vulnerability to by-catch, habitat destruction and a human desire for their meat and carapaces, all to return to the very beach they hatched on to lay the foundations for the next generation.

Yet, due to significant conservation efforts, we are seeing reverses of worrying trends and are fortunate to be afforded windows into their miraculous lives. From mating rituals witnessed at Sipadan island in Malaysia to the pristine nesting beaches of the Maldives, encounters are still abundant and enchanting.

Marine turtles belong to the larger group of reptiles known as Testudines, all of which possess a shell evolved from their ribs that acts to protect the body. The oldest known relative of modern sea turtles dates from 157 million years ago - making this group of reptiles older than other so-called ‘ancient’ animals such as crocodiles and snakes.

The smallest marine turtle in the world is the Kemp’s ridley who’s shell reaches just 75cms in length, whereas the largest is the leatherback which can weigh up to 900kg and whose flippers can stretch to just short of 3m from tip to tip. However, these modern giants are dwarfed by Archelon ischyros, a prehistoric monster turtle who’s shell grew up to 4.6m in length.

Marine turtles swim in every ocean of the world except those of the cold polar regions. The Kemp’s ridley turtle is only found in the Gulf of Mexico and the east coast of the United States of America, whilst the flatback turtle is only found in northern Australia and southern Papua New Guinea. All the other species are found across the globe. In South East Asia, the most common species are green and hawksbill turtles.

Immediately after hatching, marine turtles head straight out to the open ocean, where they then spend much of juvenile lives. During this time, little is known about the young turtles behaviour. It is only when reaching sexual maturity do the turtles return to coastal waters to feed and mate. The females then drag themselves onto the same beaches on which they were born to lay their eggs.

Marine turtles employ an unusual method of determining the sex of their young. The eggs are buried within the nest at a depth controlled by the female - she doesn’t simply dig away and leave the eggs when she has had enough. At this carefully chosen depth the eggs are incubated at a very precise temperature range - between 29-30c. Above this range, the hatchlings are predominantly female. Below, they are male.

Apart from adult green turtles which feed almost exclusively on algae, marine turtles are omnivores who’s diets include such things as soft corals, sponges, clams, sea urchins, crustaceans, algae and jellyfish. However, each species has its own particular niche and style of feeding - hawksbills for instance have a strong, curved beak, well suited to biting off pieces of soft coral or digging for sponges in coral rubble, whilst leatherbacks have spikes in their throats that allow them to hold onto their jellyfish prey.

Like most reptiles, marine turtles are cold blooded. However, proving the exception to the rule, the leatherback is capable of maintaining its body temperature many degrees higher than that of the surrounding water. This is most likely an adaptation to the cold water found at the depths at which the leatherback commonly feed. Even in the topics, the water gets cold in the deep, dark depths.

The unique lifestyle of marine turtles - one which is supremely adapted to life in the seas and yet tied to dry land for reproduction - means that these charismatic animals are particularly vulnerable to man’s activities. They may have successfully roamed the world’s oceans for millions of years but today their survival is threatened across the globe.

These threats include the development and destruction of nesting beaches and feeding grounds, the collection of eggs for food and their shells for jewellery, being caught up as bycatch by long lining fleets or trapped in fishing nets, and eating discarded plastics. Climate change may also have a devastating effect on turtles as the critical incubation of their eggs is so dependent on temperature.

Depsite these problems, locations such as the Maldives and Sabah, Malaysia, still have significant populations of these charismatic animals and ongoing conservation efforts are helping to preserve and protect the turtles that remain. As a diver and traveller you can also make a difference and help to make the world a better place for turtles: 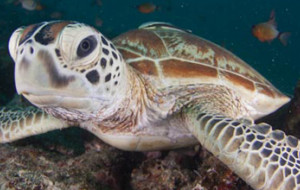 Best time to visit: Year round, but best December to April.

Best time to visit: Year round, best April to June, September to November.

With its hundreds of sandy beaches and isolated islands, Sabah is Malaysia’s most important area for marine turtles. The state is home to four out of ...

Read More
About our conservation efforts