Run by Marianne Nyegaard from Murdoch University in Western Australia, and Jennifer Han Karmy in Bali, the Indonesian part of the research programme includes population genetics, satellite tracking and the citizen science projects that assess sunfish seasonality - The Mola Log - and identify individual sunfish based on their skin patterns - The Bali Sunfish Photo Identification Catalogue. The research aims to expand our understanding of the Bali sunfish phenomenon and to enable better decisions for sustainable management of a unique and vital ecosystem.

Bali's sunfish have long been called Mola mola and this scientific name is even used as a common name throughout Bali. However this identification is incorrect and the sunfish found around Penida and Lembongan are actually Mola ramsayi - the bump-head sunfish, named after a shallow bump on the head. To further complicate matters, it was discovered in 2017 that this species had actually been described back in 1839 as Mola alexandrini, and then promptly forgotten - until now. With precedence given to the first formal description of a species, Bali's sunfish are now correctly identified as Mola alexandrini - although local divers will probably always call them Mola mola!

When are the sunfish seen?

The mola season is generally considered to start in July or August, and last well into October, but sightings are reported year round. Establishing the exact 'mola season' is not quite as straight forward as it seems, however, as the mola season coincides with a large influx of tourist divers to the area. With many more divers in the water, the chances of spotting molas increase - so is it really a 'human season', rather than a 'mola season'? To get a better understanding of when and where the sunfish are seen throughout the year, several dive operators on both Bali and Nusa Lembongan are now participating in the Bali Sunfish Seasonality Study, recording dives and mola sightings throughout the year, in the hope that any underlying patterns in sunfish occurrence will be revealed.

What are they doing on the reefs?

The molas come into the reefs to seek out the services of cleaner fish that help to get rid of skin parasites and clean up skin lesions. The most common cleaner fish seen with the mola are longfin bannerfish and adult emperor anglefish - in fact Bali is the only known location where adult angelfish exhibit this cleaning behaviour. Schools of Klein’s butterflyfish area also seen targeting the tail end of the sunfish, along with cleaner and moon wrasse. Despite the undeniable evidence that the molas visit the reef for cleaning, it is not known if there is an ulterior motive to their presence, such as for example spawning or feeding. 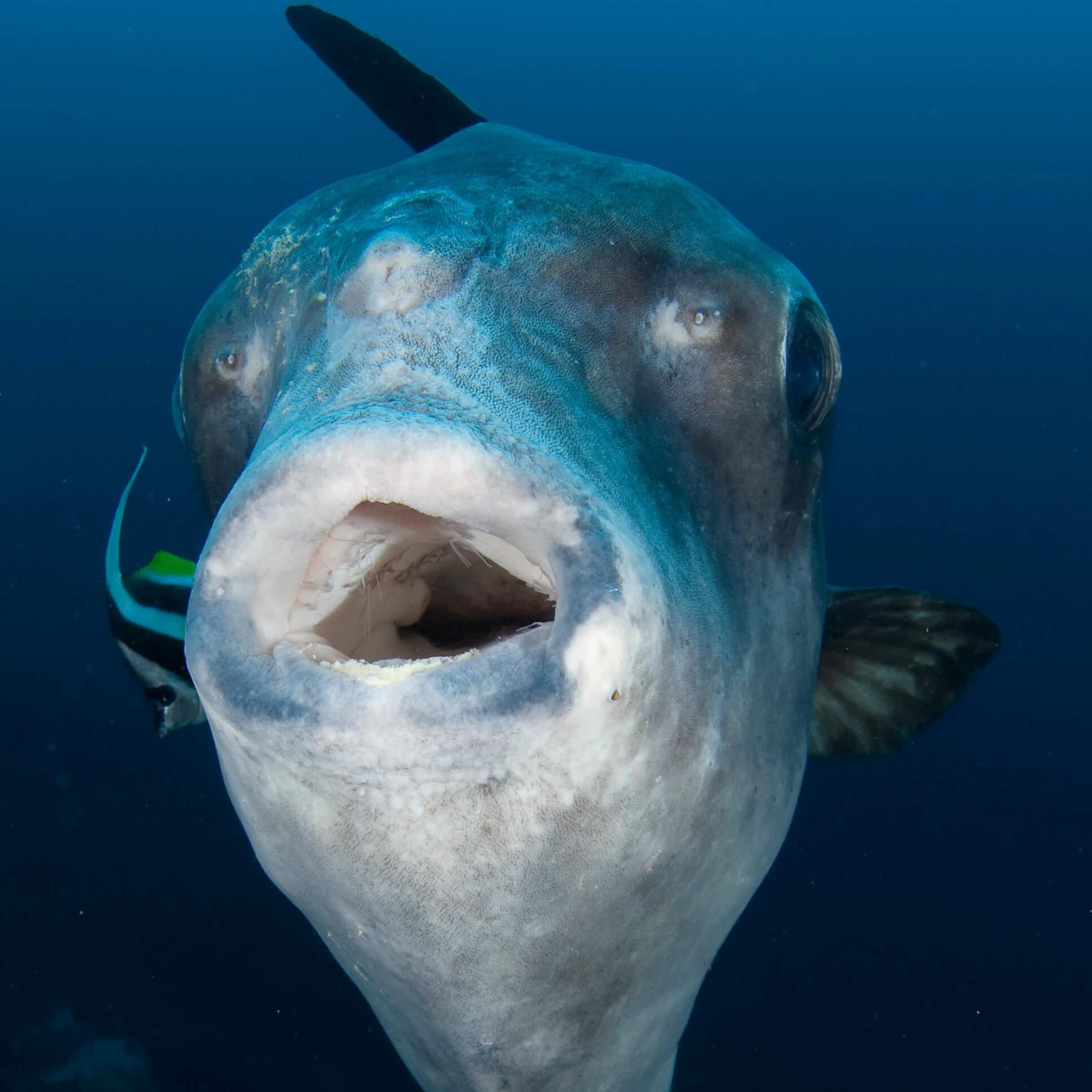 The Bali molas are anecdotally thought to be attracted by this seasonally cold water - only coming into the local reefs when the cold water is pushed up into surface waters - however, accounts of sightings by divers as far as Bali’s warm north-west coast, and occasional sightings in the warmer months, outside of the mola season, are also quite common. This raises questions about the relationship between the Bali molas and the seasonal cold water upwelling, and where the molas might be during 'off season'. Are they resident all year, but stay away from the reefs during the warm 'off season' months, or do they migrate to other, colder areas?

To better understand the association between these sunfish on Bali’s reefs and the temperature changes throughout the year, an array of underwater temperature logging devices have been recording the water temperature around the Nusa Penida islands since 2013 - an vital part of the Bali Ocean Sunfish Research Project.

Using the Match My Mola! sunfish photo submission form, citizen scientists can add to the growing Bali Sunfish Photo Identification Catalogue. This catalogue was started in 2013 and the data collected has proved vital for species identification, identifying and recognising individuals and assessing injury rates.

An individual sunfish can be identified by its unique skin patterns on its side, so the research project is primarily looking for:

If you would like to submit an image of a Bali sunfish, visit Match My Mola!

This long term data set will also be able to give insights into sunfish aggregations in relation to oceanographic phenomena, such as El Nino events. The basis of this research is recording dives - lots of them- every day, throughout the year. Participating dive centers and individuals fill out a daily log that has been dubbed The Mola Log, and with this consistent information a statistical study can be performed. The research project is always looking for long-term contributors, so if you are interested, please visit Mola Log.

To keep the impact of so many visiting divers to a minimum, a code of conduct for diving with sunfish and manta rays was developed back to the early 2000's, when sunfish experts, scientific researchers, experienced local marine managers, industry representatives and dive guides operating in the area agreed on a set of simple, effective rules. The guidelines were designed to provide safer and better quality interactions for divers while ensuring the least impact on the sunfish population of Bali. These voluntary guidelines were eventually adopted by the MPA and made an official part of the park regulations by the Klungkung District Government.

You can find out more about and stay up to date with all things sunfish by liking the Bali Ocean Sunfish Research Project Facebook page.

The islands of Nusa Lembongan and Nusa Penida, with their superb, current-swept diving, lie just a short boat ride from Bali, at the edge of the Lombok Strait. With their dramatic ...

Ready for a relaxing getaway with fantastic diving on your doorstep? Then Bali in Indonesia is the

Coming up from a dive on many a site in Indonesia and one thing you will notice are volcanoes. The ...

Where to dive with mantas in Southeast Asia and the Maldives

Top five things to do in Bali on a diving holiday

As a diver you are likely to be spending most of your time underwater when you are on a trip. But ...