COVID-19 may impact your dive travel plans. Wherever you want to go, we’re here to help. You’ll find our latest advice here.

Mention Fiji to many people and you’ll conjure up visions of swaying palms, beautiful beaches and an idyllic climate - the perfect holiday destination to relax, kick back and enjoy the island life. But for divers, Fiji has become known for some of the most exciting diving on the planet, with exhilarating bull and tiger shark encounters, stunning drift dives across spectacularly-colourful reefs, and perhaps the possibility of a manta ray or two. In short, pretty much everything a diver could want from a dream destination. And with Fiji’s inspirational, eco-friendly resorts and friendly local culture, divers can be sure of a once-in-a-lifetime dive experience - Bula Fiji! 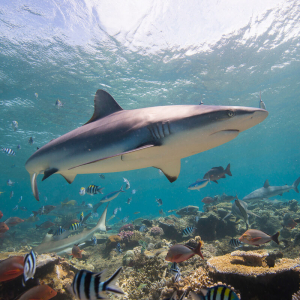 Fiji’s incredible diving is dominated by the currents that bathe the islands in a steady stream of nutrient rich water - creating the perfect conditions for the growth of corals and supporting healthy populations of bigger animals. These currents are funnelled past reefs and islands creating ‘hot spots’ for colourful soft corals in particular, earning Fiji the nickname of ‘The  Soft Coral of the World’. Famous sites such as the Great White Wall, Mellow Yellow and Rainbow Reef are all testament to the incredible proliferation of these beautiful corals. But aside from the beautiful reefs, Fiji offers adventurous divers exhilarating shark dives, manta encounters, great visibility and even whale watching making it one of ZuBlu’s favourite Pacific Destinations.

If you’d rather not travel too far then the main island of Viti Levu offers easy access to some of Fiji’s most exciting diving. In the northeast, divers can explore the many reefs that lie scattered across the Bligh Waters between Viti Levu and Vanua Levu. Named after William Bligh, commander of the Royal Navy Cutter at the centre of the infamous ‘Mutiny on the Bounty’, these stunning reefs are home to spectacular soft coral dives, plenty of sharks and other big animals, and perhaps some of Fiji’s best diving at the Vita-i-Ra Passage. Here divers can explore a mix of bommies, reefs, canyons and walls festooned in colourful soft corals and packed with marine life.

Just off Viti Levu’s southern coast lies the beautiful Beqa lagoon, where divers can explore spectacular reefs, passages and even several wrecks, as well as experience an adrenalin-pumping shark dive. The Shark Reef Marine Reserve is located between Pacific Harbour and Beqa Lagoon itself and can rightly claim to offer one of the best shark dives on the planet. The reserve was established in 2004 and, along with the extended Fiji Shark Corridor that protects sharks for nearly 50kms along the southern coast of Viti Levu, has become an important area for shark education, research and conservation. The shark dive is limited to just 20 people a day and is led by experienced guides that manage the feed and ensure divers are safe at all times. As the food is released, big bull sharks, silvertips, reef sharks, tawny sharks and the occasional tiger shark all come in to feed just meters away from divers - a once-in-a-lifetime experience with these incredible predators.  Whilst some people consider feeding to be detrimental to sharks, there is no doubt that this dive site and the team that has promoted the dive for many years has contributed hugely to the conservation of sharks in Fiji and is a fantastic example of shark tourism and the enormous contribution it can have on an island economy.

To the west of Viti Levu, the Yasawa Islands offer a slice of remote, island life with plenty of beautiful beaches to explore and some incredible diving with manta rays and bull sharks at a newly established shark dive.

A flight away to the northeast, Taveuni Island has both a beautiful national park with plenty of glorious hikes and waterfalls to explore, as well as some of Fiji’s most spectacular diving. The world-famous Rainbow Reef has over 30 sites to explore, all offering some of most colourful, soft-coral filled diving on the planet. Lying at the heart of the Somosomo Strait, this complex of reefs is bathed in a constant stream of nutrient-rich currents, creating the perfect conditions for the growth of corals. Probably the most famous of these spectacular sites is the Great White Wall - a vertical reef completely covered in white soft-corals. A special dive even by Fijian standards!

Finally, south of Viti Levu lies Kadavu Island, home to the the legendary dive sites of the Great Astrolabe Reef. This huge reef stretches over 100kms along the southern and eastern coasts of Kadavu, creating one of the largest barrier reefs on the planet. Astrolabe’s shallow lagoon provides a perfect sanctuary for juvenile of many species and it is thought that this area is a breeding ground for large animals such as sharks, tuna, trevally and marlin - meaning divers have a chance to encounter some big mums and dads outside the reef! Kadavu offers a mix of dive sites including drop-offs, pinnacles and fringing reefs, with plenty of fish life including sharks and beautiful corals. Famous sites include the Naiqoro channel with its strong currents and spectacular marine life, Alacrity Rocks which offers lots of swim-throughs and passages to explore, and Manta Reef where resident manta rays can be seen year round.

Most of Fiji’s fringing and barrier reefs lie some distance from the shore and so the vast majority of dive sites are reached by boat. However, the sheltered lagoons that lie behind the barrier reefs are perfect for swimming and snorkelling, and children and adults alike can head out straight off the beach without having to worry about currents or waves. But if you really want to get the best out of a snorkelling trip to Fiji, you’ll need to join a boat trip out beyond the edge of the reef to experience the incredible reefs and marine life that have made Fiji so famous.

Many of the best dive locations also offer spectacular snorkeling with plenty of marine life and beautiful corals in the shallows. The famous soft-coral walls are too deep to be easily explored by snorkelers, but you can encounter manta rays, turtles, small reef sharks, huge amounts of fish life and of course, Fiji’s wonderful corals.

The 330 or so inhabited islands that make up the nation of Fiji are either the remnants of ancient volcanoes that first erupted over 150 million years ago, or coral islands that grew around the volcanic peaks as they pushed up to the surface. Yet despite this violent start in life, Fiji today is a little more relaxed - with a reputation for a near-perfect climate, beautiful scenery and a laidback yet vibrant culture. Fiji covers nearly 200,000 square kilometres but just 10% is land, with the main islands  - Viti Levu and Vanua Levu - accounting for much of this. The rest of this island nation is made up of tiny islets, reefs and lagoons, scattered across a vast expanse of deep ocean water; it’s no wonder that this beautiful island nation is home to such extraordinary diving.

How to get to Fiji

With an economy that is so reliant on tourism, the Fijian government has made sure these islands are well connected to major travel hubs on both sides of the Pacific. Guests can fly in from Los Angles, San Fransisco or Hawaii in the US, whilst Australia, Singapore, Hong Kong, Japan, Korea and New Zealand also offer direct flights into Nadi.

Once in Fiji, the resorts of Viti Levu are a drive away, while the other island destinations can be reached by ferry or short, local flights. The domestic terminal is just next door to international arrivals and once you’ve reached your beautiful Pacific island of choice, the resort will pick you up from the airport - let the holiday begin!

Where to stay in Fiji

Modern Fiji has a huge selection of different accommodation options, catering for everyone from backpackers to those looking for a luxury five star resort. On the main island of Viti Levu there are hundreds of options and the island is home to most of the bigger resorts. For divers we would recommend staying up in the north around Rakiraki - perfect for exploring the Bligh Waters - or around Pacific Harbour and Beqa Lagoon in the south. The chain of reefs and islands - Mamanuca and Yasawa - that extends from Viti Levu’s west coast and curves north is perfect if you want a remote Pacific island feel. To the northeast, Vanua Levu and Taveuni have some beautiful eco-friendly resorts if you are looking for something more laidback and away from the crowds, and if you are looking for a slice of real Fijian island like, then we recommend Kadavu in the far south - the perfect base from which to explore the extraordinary sites of the Astrolabe Reef.

Diving in Fiji is year round but there are two main seasons that can impact the conditions underwater - the dry season that runs from May or June through to October, and the wet season from December to April. During the dry season, the water is at its clearest with visibility up to 30m+, but it can be windier, particularly in the south, and water temperatures can drop to 23 - 25C especially in August. The wet season is calmer and warmer, with water temperatures rising to 28 - 30C, but plankton blooms and run off from the land can reduce visibility, particularly close to Vivi Levu. Kadavu and the Astrolabe Reef is best dived during the wet season when the winds drop and the south side of the island is calmer.

Our recommendation for the best times of year are the transitions between the two main seasons - November, and April to May - when conditions can be fantastic and the islands are a little less busy. Given the cooler water temperatures in the dry season, we recommend a 5mm wetsuit for those that feel the cold, while for the rest of the year, a 3mm is ideal.

Average: Fiji is well connected to other countries around the Western Pacific and the US, either directly or through Manila and Guam.

Stunning: Fiji’s 330 inhabited islands and over 500 deserted islets are home to hundreds of beautiful beaches - you will be spoilt for choice!

Average: Fiji is not known as a big destination for partying but you can find a few bars and restaurants in the towns. In the more remote areas, the resort restaurant will be the only option. You can buy locally made handicrafts throughout Fiji.